The settlement agreement had been awarded to the effect that Pieter Swart pay the claimant an amount of R11 7000 by no later than 30 September 2015. Pieter Swart failed to appear at court on two occasions and did not bother to send a legal representative to represent him. 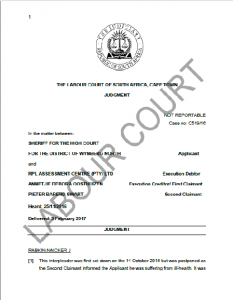 After the initial settlement agreement was signed by the parties at the CCMA, Pieter Swart shouted down the passage that he would be paying a cent. The settlement was reneged on and an application for interpleader was filed.

Pieter Swart submitted a letter from his dental surgeon stating that he would not be able to travel for the rest of the year. But he doesn’t bother filing an application for postponement. This was not the first time he used ill health to request postponements.

One Reply to “Interpleader Awarded Against Pieter Swart & RPL”